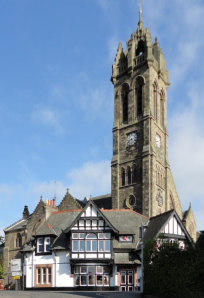 The Season of Easter lasts for 7 weeks, all the way to Pentecost.  During it, we think of the various post-Resurrection appearances of Jesus.

So during this time, our church bells remind us that we are still engaged with the Easter story.
Played by Anne Derrick

Hymn: Praise to the Lord, the Almighty

O God from whom every gift derives, we worship you this day. We
come to you in thanksgiving and praise, to know that you are God
and to place our lives anew into your perspective. Enlarge our
vision this hour with your Word. Instil in us, again, your hope in
place of our despair, your peace where our hatred threatens, your
joy amidst our depression, your love overwhelming our apathy. May
your Holy Spirit surround and within us now, and forevermore.
AMEN

Afterward Jesus appeared again to his disciples, by the Sea of
Galilee. It happened this way: Simon Peter, Thomas (also known
as Didymus), Nathanael from Cana in Galilee, the sons of Zebedee,
and two other disciples were together. “I’m going out to fish,”
Simon Peter told them, and they said, “We’ll go with you.” So they
went out and got into the boat, but that night they caught nothing.
Early in the morning, Jesus stood on the shore, but the disciples
did not realise that it was Jesus.

He called out to them, “Friends, haven’t you any fish?”
“No,” they answered.

He said, “Throw your net on the right side of the boat and you will
find some.” When they did, they were unable to haul the net in
because of the large number of fish.

Then the disciple whom Jesus loved said to Peter, “It is the Lord!”
As soon as Simon Peter heard him say, “It is the Lord,” he wrapped
his outer garment around him (for he had taken it off) and jumped
into the water. The other disciples followed in the boat, towing the
net full of fish, for they were not far from shore, about a hundred
yards. When they landed, they saw a fire of burning coals there
with fish on it, and some bread.

Jesus said to them, “Bring some of the fish you have just caught.”
So Simon Peter climbed back into the boat and dragged the net
ashore. It was full of large fish, 153, but even with so many the net
was not torn. Jesus said to them, “Come and have breakfast.”
None of the disciples dared ask him, “Who are you?” They knew it
was the Lord. Jesus came, took the bread and gave it to them, and
did the same with the fish. This was now the third time Jesus
appeared to his disciples after he was raised from the dead.

Prayer in time of crisis

Lord Jesus,
In the midst of a storm,
You said, ‘Peace be still.’
Bid our anxious fears subside,
Sustain your church in faith, hope and love,
Bring our nation, and our world through this tumult,
Grant wisdom to those with heavy responsibilities,
And healing and hope to those who are infected.
Amen.

Hymn: Now thank we all Our God

This site uses Akismet to reduce spam. Learn how your comment data is processed.