Please use this material in any way useful to you as you share in worship privately at home in these difficult times. 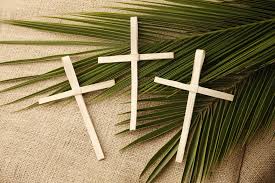 Hosanna to the Son of David! Hosanna in the highest!

Blessed is the One who comes in the name of the Lord. Hosanna in the highest!

A Prayer for today

Almighty God, on this day your Son Jesus Christ entered the holy city of Jerusalem and was proclaimed King by those who spread their garments and palm branches along his way. Let those branches be for us signs of his victory, and grant that we who bear them in his name may ever hail him as our Lord, and follow him in the way that leads to eternal life. In his name we pray. Amen.

Jesus Comes to Jerusalem as King

The story according to Matthew, chapter 21

As they approached Jerusalem and came to Bethphage on the Mount of Olives, Jesus sent two disciples, saying to them, “Go to the village ahead of you, and at once you will find a donkey tied there, with her colt by her. Untie them and bring them to me. If anyone says anything to you, say that the Lord needs them, and he will send them right away.”

The crowds that went ahead of him and those that followed shouted, “Hosanna to the Son of David!” “Blessed is he who comes in the name of the Lord!” “Hosanna in the highest heaven!”

A Reflection on this day

A Prayer for this time of global emergency

Lord Jesus, In the midst of a storm, You said, ‘Peace be still.’ Bid our anxious fears subside, Sustain your church in faith, hope and love, Bring our nation and our world through this tumult, Grant wisdom to those with heavy responsibilities, And healing and hope to those who are infected. Amen.

and the Blessing of God, Father, Son and Holy Spirit, be with us all.